To the
Glory of God
and in Memory of
GEORGE UPTON
Aged 30 years
- AND -
JAMES GOLDSMITH
Aged 19 years
Two Platelayers in the employment
Of the SOUTH EASTERN RAILWAY
who were killed on the 1st April 1898
while engaged in their duty.
“in the midst of life we are in death”
THIS MEMORIAL IS ERECTED BY THE PARISHIONERS
​
​Sadly, by 2015, the facade of the headstone had largely fallen away and with it the dedication to the two railwaymen. The headstone was paid for by the villagers at the time and some of today’s parishioners felt that we owed it to our predecessors to restore it, thus keeping alive the memory of George Upton and James Goldsmith. The proposal was that the existing headstone should be repaired with the inscription reinstated in the style of the original.
UPDATE:
​In January 2016, a fresh appeal was launched to raise money to have the original headstone restored. The appeal was fantastically well supported and raised considerably more money than was actually required. After consultation with the major sponsors of the fund, a decision was made to have a commemorative plaque cast and mounted in the ticket office at Hildenborough railway station. That was completed and STILL there were funds left over so a donation was made to a charity called Woking Homes.

​An unveiling ceremony was held on 16th July 2016. The timetable ran as follows:

At 11.30 am – the plaque was unveiled at the station by Judith Upton, the great-granddaughter of George Upton, one of the two men tragically killed. 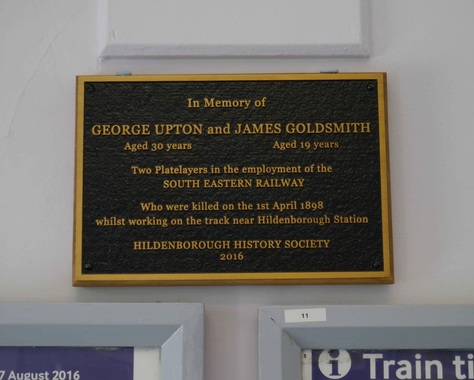 ​At 12.30 pm – a re-dedication service, given by the vicar, Reverend Tim Saiet, took place in the churchyard. The headstone was draped in a flag of St George.
​
The vicar's address went as follows:-

"On behalf of the Family of George Upton and James Goldsmith and for all who have been part of this journey to restore this headstone, I welcome you here to this re-dedication of their headstone.

We journey today around our country on railways first built on the hard work and diligence of those who have gone before us.

It’s doubtful if these men would have ever known the enormity,  gratitude , affection and respect upon which they are held. For they gave their lives in the service of not just our great railway, but also in the service of our community, for the station at Hildenborough, is now as it was then, a huge asset and gift for those who choose to travel by rail.

It is clear the whole village was deeply moved by the tragic accident of 1st April, 1898.
The Headlines reported:

Why is this so important?

Well in Hildenborough we have a deep sense of duty. We understand that some things must not be forgotten , we care for one another today, as they did in George’s and James’s day. We here knew it was right and fitting to restore this headstone and we see it now in all its splendor.

There are many people to thank for us all being here today and you know who you are.

I would like to give special thanks to Nigel, Howard and Maurice as well for their vision and commitment to this project.

I would just like to say thank you for caring enough to make a difference and doing what was right. Thank you for raising the money needed to restore this headstone and thank you for giving enough that a charitable donation can also be made Woking Homes".
​Between 1.00 pm and 3.00 pm – refreshments were taken in the Church Hall.

Howard Dolling made presentations at the railway station and at the Church Hall, where a donation of  £600 was given to Woking Homes.  An illustrated history of the tragic railway accident prepared by Maurice Nairne and Nigel Simpkins was on display at the Church Hall.

Woking Homes is a care home for the elderly, the majority of residents being retired railway workers and their spouses.
The Society gratefully acknowledges the support of:

Thanks to Maurice Nairne for the article and to Nigel Simpkins for details, and initial launch, of the Appeal.
​
And last but certainly not least, many thank yous to Howard Dolling, the Society's Treasurer, who gave up an enormous amount of time to make this all happen including, amongst other things, fund raising, organising the manufacture of the plaque, printing leaflets and programmes, and liaising with the Rail companies. A grand job jobbed.....(applause).                      (Now, Howard....about this plaque for Brian Goodale......)