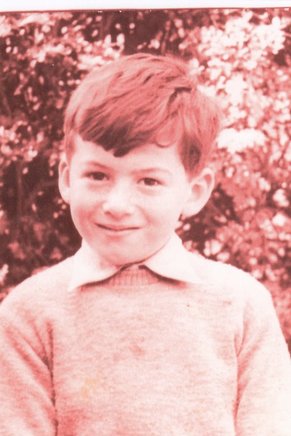 Geoff, 7 years old, in 1953.
In September 1951 my happy life spent at home with my Mum was turned upside down when, aged four years and eleven months, I had to join my big sister Monica at Hildenborough Primary School. I don’t remember much about my first day apart from holding tightly to my mother’s hand as we walked across the (what seemed to me, huge) playground and then sitting cross-legged on the dusty floor of the school hall.

Feeling more than a little frightened, I obviously did not realise what lay before me, because when my Mum came to meet me at lunchtime and enquired as to how I got on, I replied, “It was alright, but I shan’t go again”. Little did I know…!

My first classroom was in the (then) new-ish huts (now the swimming pool) and my teacher was Mrs Durrant. The school day started at 9am ‘til noon and then 1pm until 3.30pm with a break during the morning, then again during the afternoon.  I don’t recall much about the lessons but I do remember that the classroom contained a sand tray and toys that we were allowed to play with on a Friday afternoon. My favourite toys were the Lego-type building block sets.

During morning break, we were all given a small bottle of milk to drink. At afternoon break we would have a rest, laying our heads on our folded arms on the desk.
It was all change for me at the start of my second year in the infants. My sister left the school having passed the entrance exam for Walthamstow Hall School in Sevenoaks. Aged six, I now had to walk to and from school on my own (I can’t see that being allowed these days!). Moving up a class meant a new classroom (the hut next door) and a new teacher. I think this may have been Mrs Griffiths although I also remember a tweed-suited lady who went by the wonderful name of Miss (or Mrs) Fidget! I think she may have been a supply teacher. The biggest change, however, was Mr Haisell’s appointment as Headmaster following Mr Fitz’s retirement. Mr Haisell soon made his mark upon the school, introducing a school uniform and badge with the motto ‘Gaudentes Laboremus’ as well as a house system. There were then three houses and places within these were allocated according to whereabouts you lived. i.e. ‘Riding’ house for the village kids, ‘Hilden’ for those who lived towards the Tonbridge end of the village (beyond the Flying Dutchman pub) and ‘Weald’ for children from more outlying addresses or neighbouring villages.
My third year at the school meant a move up to the juniors who were taught by Mrs Gwyther and Miss Mills. The classrooms were situated in the old school building, some of which were separated only by a partition wall. The classroom walls were painted in cream and green gloss paint and the windows were too high up to see out of. The whole place smelled of the coke stoves that provided heating during the winter. Despite being quite a shy child, I felt more grown-up and confident now that I was in the juniors. The only downside of being in the juniors was that afternoon lessons went on for an extra quarter of an hour until 3.45pm.

My best friends at this time were my Mount Pleasant neighbours Malcolm Pettit (who was in the year above me) and Charlie Penfold (who was in my class). I remember these as happy days.
Most of the children had school dinners in the Drill Hall opposite the school in Riding Lane, but after sampling these a couple of times myself, decided I was not keen so was allowed home for lunch, a cooked meal if Mum was home or a sandwich if she was at work. At five to one I would run back up Riding Lane for school. On summer afternoons after school had finished for the day, I could be home in five minutes. After a quick change of clothes it was over to the recreation ground to play with the village gang. We returned home for tea then straight back to the rec where we would play until dark.

At school, in the playground, we would play British Bulldog, marbles, or flick cigarette cards up against the air raid shelter wall. We played conkers in the autumn. Winter games were similar and during icy weather we would make marvellous slides along the length of the playground, hitting the fence at the bottom to stop, then back to the top for another go! (I think health and safety considerations may preclude such delights these days!).
One of the lessons I can remember from this time was ‘Music and Movement’ which took place in the school hall. This would consist of us children using our imaginations, in response to prompting from a radio programme, to dance and act out the suggested scenarios. PE lessons were held in the hall in winter and in the playground in summer. We also played rounders or stoolball in the playground, weather permitting.

During this period some improvements were made to the school building with the air raid shelter being converted into a staff room as well as two lovely new classrooms which were installed in the orchard between the school and the churchyard.  The only thing that was never modernised was the old and out of date toilet block. This was situated outside at the back of the school next to the recreation ground. It was a route march in all weathers to get there and the boys’ urinals were completely open to the elements.

One of the good things about school in those days was Quinnell’s sweet shop which was located directly opposite the school gates. Here you get a tuppenny ice lolly or, if you were in the money (admittedly, this wasn’t very often!) a quarter of your favourites.
​ 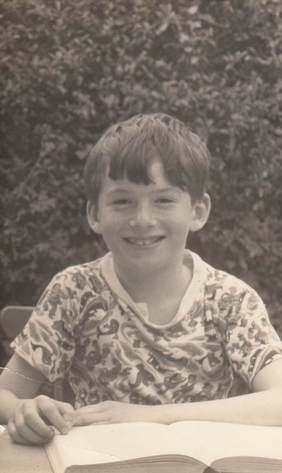 Geoff, aged about 9.
In the term I became ten years old I was placed in a group of children to be moved up a class to the year above, due to the very high number of children in my year. I was sorry to be separated from all my friends but had to make the best of it. My teacher was Mr Emery, I was in his class for my final two years at the school.

Around this time I can recall competing in the high jump at the school sports and finishing second to Trevor Tickner who was a year older than me. I remember thinking that he wouldn’t still be at the school the following year which meant I might win it. Sure enough, I did!
My last year at Hildenborough was my most memorable and enjoyable. I remained in the same classroom as the previous year with Mr Emery and all my former classmates joined us. On my table were: Angela Moss, Jackie Eyre, David Berry and Madeleine Harris. Our table was next to the door and I was given the job of school bell ringer. This involved slipping out of the classroom and ringing a large hand-bell to announce break times as well as the end of the school day. It was great to be one of the ‘big boys’ in that final year. We enjoyed country dancing and going for swimming lessons to the pool at the Hilden Manor.
The most important event of the year was the ‘eleven plus’ examination which would determine which secondary school we would go on to attend; and to a great degree what direction our future lives may take. There were only two grammar schools at that time; one for boys and one for girls  and because of the huge numbers of post-war children born in 1946, competition was pretty stiff. From the forty-three children in my class only two passed the examination; Roger Bullimore and Kathleen Beelam. Despite my having two interviews for the Judd school, I unfortunately failed to impress! This was my first major knockback in life and I felt a failure as my sister had passed and I was expected to also, (though goodness knows why!). And so it was that in July 1957, I walked out of the playground of my lovely village school for the last time, taking with me many happy memories. I moved on to Sussex Road boys’ school and subsequently (via the ‘thirteen plus’ exam) to the Technical School in Tunbridge Wells.