A crippled German Junkers Ju88A bomber crash-landed in a field at Tanyard Farm, Hadlow Road, Tonbridge.
One of the crew baled out and the remaining three were "captured" by a group of Tonbridge School boys who were early on the scene with Special Constable Charles Barkaway, a local theatrical producer and a founder of the Local Amateur Musical Players.
Constable Barkaway hurried from the air raid warden post in Higham Lane opposite his family's farm, grateful to the German pilot for banking to avoid the house with his parents inside.
The parachutist, air gunner Corporal Heinrich Agel, landed on the roof of the Boiling Kettle cafe (now a petrol station) in Hildenborough and spent the rest of the war as a prisoner in Canada and Scotland, returning some 40 years later to recall the incident that saved his life.
The captain of his plane ordered him to jump to avoid being killed in his turret. A Hurricane fighter caught his plane on its way to attack the RAF airfield at Henley.

The above article was copied from the Courier, a local weekly newspaper covering the Tonbridge area, dated 3rd September 2010, and has been on the website since June 2014. After reading the above, Heinrich’s daughter, Cornelia (Conny) Loh, contacted us and has kindly furnished us with heaps more information and a bunch of photographs.
Heinrich Agel was born on March 15, 1917. He had three brothers and two sisters (Maria and Erna). Two brothers died in the war in Russia, his younger brother died in 1950 in an industrial accident, at the age of 25.
After finishing school he learned the profession of a painter. He played a lot of sports, but handball was his greatest hobby.
In 1936 he joined the German Luftwaffe, based in Wunstorf. He was Unteroffizier (equivalent, at the time, to a Corporal in the British Army).
He first crewed Heinkel bombers as gunner and wireless operator during the battles of Poland and France. Then his crew were re-trained in the Junkers Ju88, flying sorties from Greil, an airfield north of Paris, at first they flew without bombs and acted as decoys to lure British fighters towards waiting German Messerschmitts. 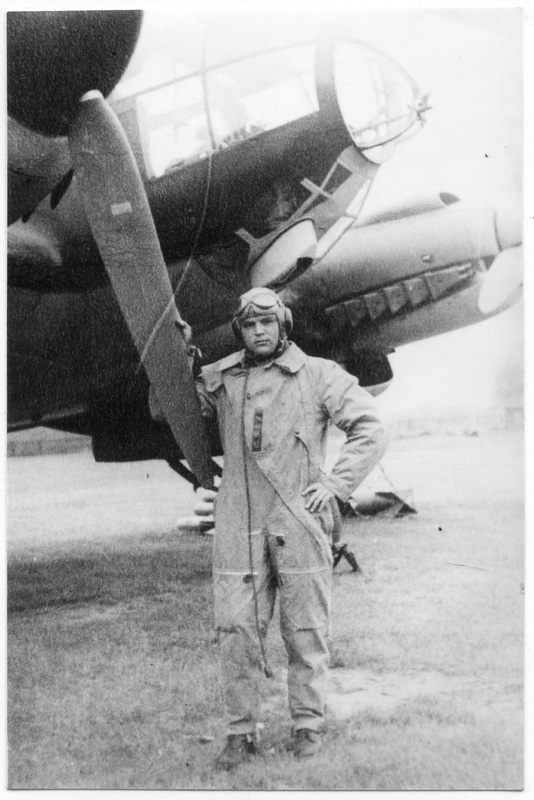 Heinrich in 1940, standing by his Heinkel He111 aircraft.
His first and - as it turned out – last bombing raid to England was on the morning of September 6th, 1940, on board a Junkers Ju88A, serial number 8104, call sign F1+HP, attached to 6/KG76 (No.6 Squadron, 76 Bomber Group). The objective was the airfield of Kenley, south of London. Upon reaching Kenley, they were engaged by a Hurricane piloted by Flying Officer Bowring. In the ensuing fight, the Hurricane’s windscreen was shattered but F/O Bowring managed to keep flying. They were also engaged by Ft. Lt. M.H. Brown of No.1 Squadron and the starboard engine caught fire.  A further attack came from a Hurricane piloted by P/O C.M. Stavert. By this time, the Junkers was heading towards Tonbridge and was badly damaged, the bombs were dropped blind. Unteroffizier Agel was a gunner in the turret underneath the fuselage so his pilot, Leutnant Kernback, ordered him to bale out knowing a crash landing would mean certain death.

Heinrich baled out over Hildenborough and landed on the roof of the Boiling Kettle café (what is now the BP petrol station on London Road). He was taken inside by the wife of the café owner and offered a cup of tea! Shortly afterwards, a policeman came and took him to Tonbridge police station.
The incident was reported in the local paper, the Tonbridge Free Press, dated 13th September, 1940, thus:-

The Junkers crash-landed in a field at Tanyard Farm, off Hadlow Road. The three remaining crew, Leutnant  J. Kernback, Feldwebel W. Schumacher and Gefreiter R. Riesel all got out OK and were also taken to the police station.

The scene was attended by the Tonbridge Auxiliary Fire Service. One of the firefighters was a chap called Charlie Harding, quite handy with a fire hose but also a dab hand with a paintbrush. He later painted a watercolour of what he saw that day…..
​ 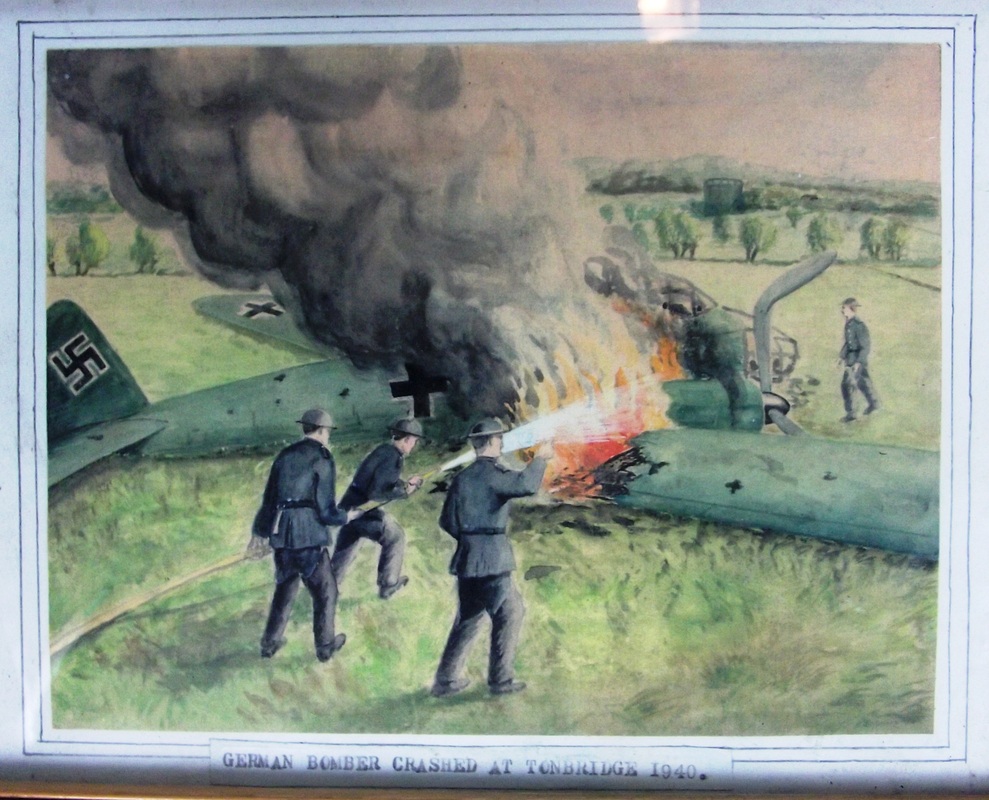 Heinrich was then taken to a prisoner-of-war camp in Hyde Park, London, for one week, then to Old Ham camp near Manchester where he met up with the rest of his crew again. In February 1941, he was sent to Canada on board the SS Duchess of York. After a stormy crossing of 21 days, they landed at Halifax, then spent the next five years in various PoW camps in Canada, including those at Schreiber (Ontario), Ozala (Rocky Mountains), Lethbridge (Alberta) and Grand Prairie (Edmonton). During this time Heinrich obviously kept up with his love of sports as can be seen on a postcard he sent home in 1943. Heinrich is standing in the back row, second player from the right…… 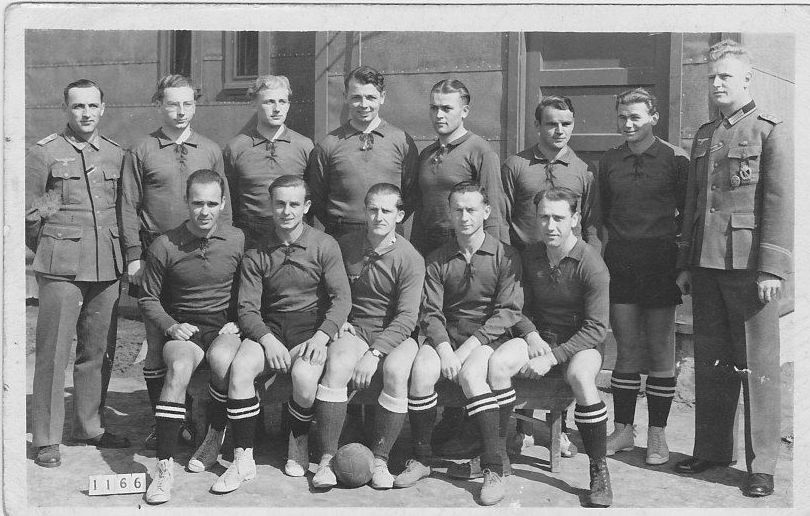 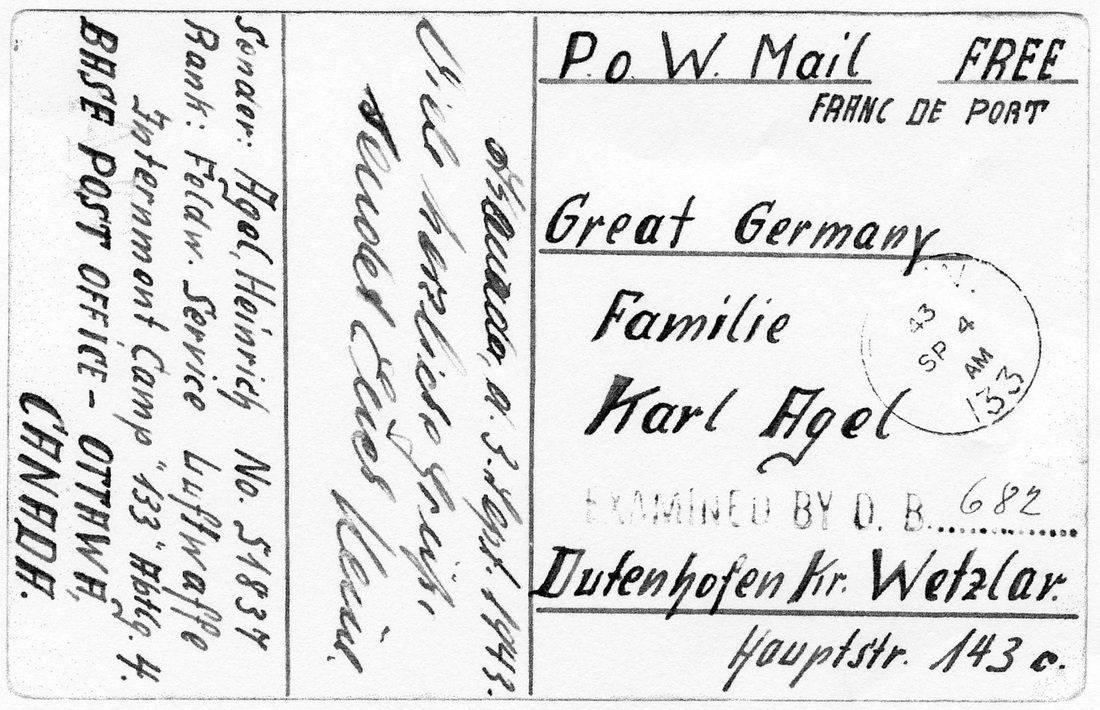 In April 1946, he was brought back to Great Britain and sent to Watten, on the northernmost point of mainland Scotland, where he would remain until his eventual discharge in June 1947.

He returned home to Wetzlar-Dutenhofen and carried on in his old profession as a painter. In 1948, Heinrich married Elfriede, and subsequently had three children and 5 grandchildren. In the 1950’s they built a house in Dutenhofen.

He often talked about his landing with the parachute in Hildenborough and the time in Canada. So in 1979, Elfriede’s sister Renate and her husband Gottfried Gemperlein, travelled to England searching for the place where Heinrich had landed. Heinrich couldn’t remember the name of the place but thought it might have been a bakery. They particularly wanted to find the “baker’s” wife who had shown such kindness to Heinrich 40 years previous. Renate and Gottfried were staying with an English friend, a Mrs Eileen Simms of Orpington, who contacted the Kent & Sussex Courier which ran a feature outlining Heinrich’s story, on September 12th 1980.
As a result of that newspaper article, Mrs Simms was contacted by a Mr P.H. Young who had witnessed Heinrich bale out of the stricken bomber and then watched as the bomber crash-landed in the field. He was able to tell them of the Boiling Kettle which he described as “a very old tumble-down type café”, and of the pet’s tombstones, but that the “charming old place was demolished some years ago and was replaced by Hilden Service Garage”. Also that the owners were already fairly elderly at the time and were unlikely to still be alive.
The Courier then wrote a follow-up article on October 24th 1980, telling Heinrich’s story in much more detail along with a few photographs. As a result of THAT article, a Mr James Angell of Penshurst wrote a letter to Heinrich, reproduced here:- 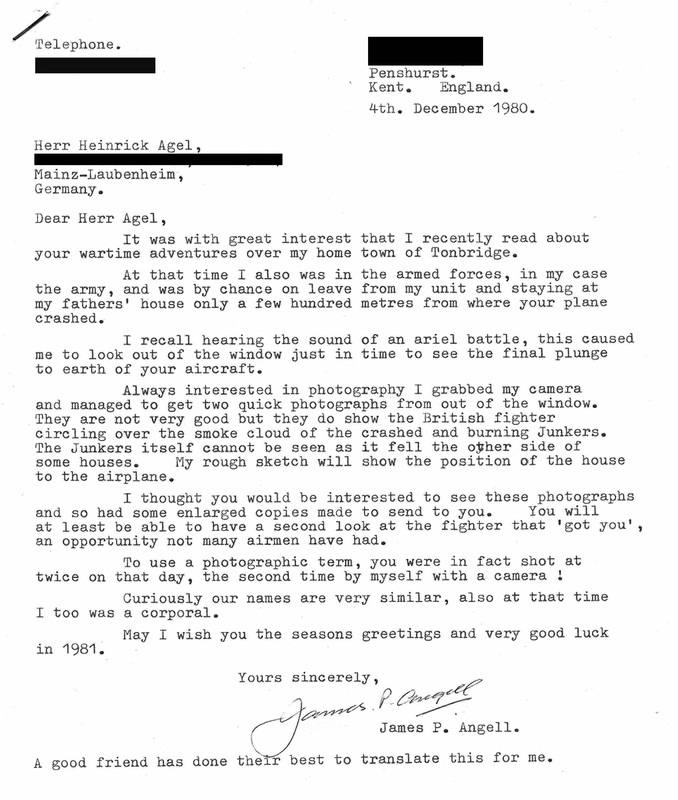 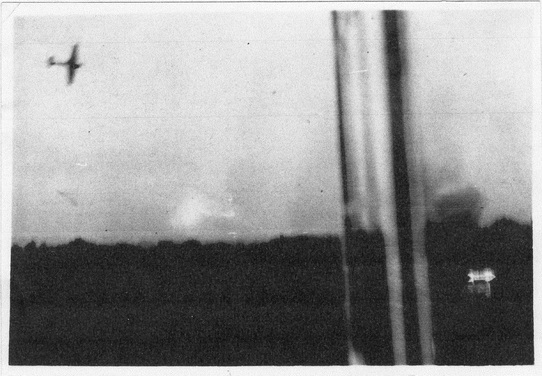 Mr Angell's photo of the Hurricane circling over the plume of smoke from the crashed Junkers.
I think it’s quite fitting to let Heinrich have the last word with his letter of reply to Mr Angell:- 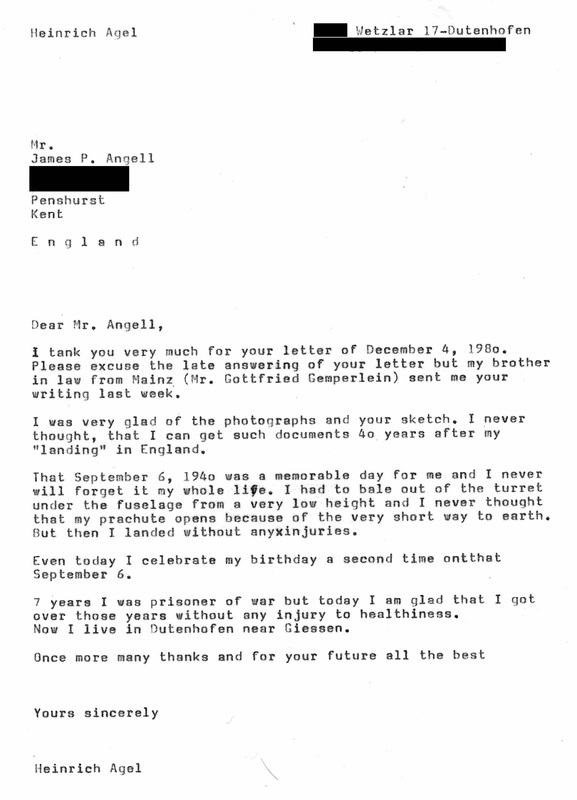 Heinrich retired in 1983 and died peacefully on January 29, 1998.  His wife, Elfriede, died on January 1st 2019, aged 92. Their daughter, Conny, along with husband Burkhardt, now live in the house that Heinrich and Elfriede built for themselves in the 1950s. 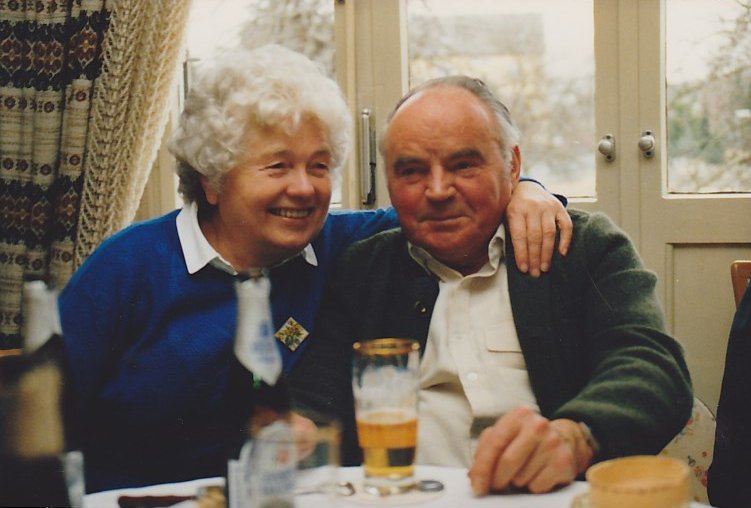 Heinrich and Elfriede in 1993.
Many thanks to Heinrich's daughter Cornelia Loh, for all the photographs, press cuttings and information, (except for the image of the painting).
Credit and thanks for permission to use the image of the painting goes to Shaun Jeffery, who now owns the painting, and manages a website all about Tonbridge Collectables. To see his website click here.
As an aside, Shaun also has a photograph of the artist with the rest of his Auxiliary Fire Service crew... click here.... (....and go to the bottom of the page).