Tales of Yesteryear
1940 - Heinkel Bomber crash-lands near Hildenborough
On 11th September, 1940, a Heinkel He111H-3 bomber (serial number 3233) attached to 3/KG1 (No.3 Squadron, Bomber Group 1) crash-landed in a field near Hildenborough. The aircraft survived largely intact, the wings were removed and it was taken away on a large flat-bed lorry trailer. However it was found to be too large for the narrow roads of the time and was parked for a while in the car park of the Half Moon public house in London Road, before the army could deal with it properly. The following is a collection of people's memories of that day, some photo's, and the facts on the aircraft and crew.
(Please note: A lot of confusion surrounds the circumstances of exactly who and what attacked the Heinkel. Some say Spitfires, some say Hurricanes, and various pilots laid claim to the damage at the time. Suffice to say, it was a busy time in the skies over Kent that day).

Below is a copy of the Combat Report submitted by Pilot Officer William Blair Pattullo where he describes the incident and shares the credit with Flight Lieutenant Denis Geach Parnall. 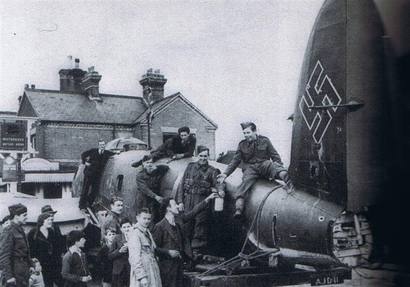 "On September 11th, a Heinkel 111 was hit by AA fire over London and lost an engine; it was attacked by three hurricanes and forced to land in the village. The crew tried to set fire to it; Two crew members were captured unhurt and two were wounded. The wings were taken off the plane and the body was loaded onto a Queen Mary trailer (60 feet long). It was taken further up the village but they realised it was too wide for the main road. It was then parked outside the Half Moon Pub for a few days. I cycled down one morning and stood gazing at it and the soldier guarding it said 'Look after it while I go and have a cup of tea.' I was speechless."
Source: Des Sheed's War Memoirs
The following is an excerpt from a paper compiled by Morgen Witzel for the Leigh Historical Society:-

Wednesday 11 September, 1940 is one of the red letter days in Leigh wartime history The ARP logbook gives the official account of what happened.

1510-1650, warning. Large enemy forces attacked London. Met by heavy fighting and barrage. Planes seen coming down and 1 parachute. One German plane attacked by 3 Spitfires passed behind church and low down and crossed over Upper Kennards and landed in Old Barn large field. Heavy bursts of machine gunfire as he passed church. 5 on board, 3 wounded. Plane not smashed up. Wardens, police and military on spot. Many planes reported down in district.

Two German bomber groups, 1 and 76, escorted by several hundred fighters, launched a raid on the London docks in the mid-afternoon. They got through and dropped their bombs, but as they were turning south, the bombers were pounced on by at least three squadrons of British fighters. The squadron diary of 1 RCAF Squadron tells how the interception was made.

12 Hurricanes of Number 1 Canadian Squadron left Northolt 1542 hours. The squadron led by Squadron Leader McNab in sections in line astern sighted a formation of about 20 Heinkel-111s northwest of Gatwick at 1615 hours. The enemy was about 300 feet below and proceeding south, and the attack was opened from the beam and moving to astern, breaking up the formation on the original attack, after which the combat developed into individual dogfights.

One Canadian pilot, Flying Officer Yuille, attacked a lone Heinkel-111 piloted by Corporal Steinecke of Bomber Group 1. According to his own after-action report, Yuille made a number of attacks on the Heinkel and seems to have worried it like a terrier with a rat, pursuing the bomber down and blazing away at it as it lost altitude. He was joined by two other Hurricanes, one of which was flown by Sergeant Scott of 222 Squadron. Scott charged headlong into the attack, completely oblivious of any other British fighters nearby; Yuille complained later of getting shoved out of the way by Scott while he lined up to make his own attack. In this fashion they pursued the hapless bomber down over Leigh, low over the church and virtually grazing the roof of Upper Kennards, until it made a crash landing behind Old Barn. Corporal Steinecke managed to put the plane down more or less intact, sliding between two rows of poles which had been put up to prevent glider landings, and finally the Heinkel came to a stop, riddled with bullet holes and with three of the live crew injured.

Several people remember seeing the bomber go over, including a man who was part of a party picking hops in a field near Meopham Bank. “We saw it coming in,” he recalls, “and we knew it was going to crash. We ran straight across the fields to get to it.” The duty Home Guard had also seen the plane come in and had run along the railway line, but were ultimately beaten to the scene by some soldiers who had come along the road from the Hildenborough direction, arriving in time to receive the surrender of Corporal Steinecke who had walked across the fields towards Meopham Bank.

Most of the village seems to have gone out to see the plane, and by the time Sir Eric Macfadyen arrived home from London his farm appeared to have suffered an invasion. “I arrived home yesterday to find an enemy bomber,” he wrote in his diary “a Heinkel-111, dividing barley corn meadow from the Old Barn big field. It had been driven down by four Spitfires, and had taken the ground in the big field... Of the crew of five, three were slightly hurt. ...This happened about 3.45 pm. By six o’clock when I got home, several hundred sightseers had collected. A man was at the gate into the road with a hat, collecting for the Spitfire Fund.”

A woman who remembers being taken to see the wreck as a small girl recalls that after it was removed from Sir Eric’s field it was kept, minus its wings, on show for some time in the car park of the Half Moon pub in Hildenborough. She also remembers vividly seeing a blue and white badge on the side of the aircraft, which she was astonished to learn after the war was the insignia of BMW.

For more information on the Leigh and District Historical Society, click here. 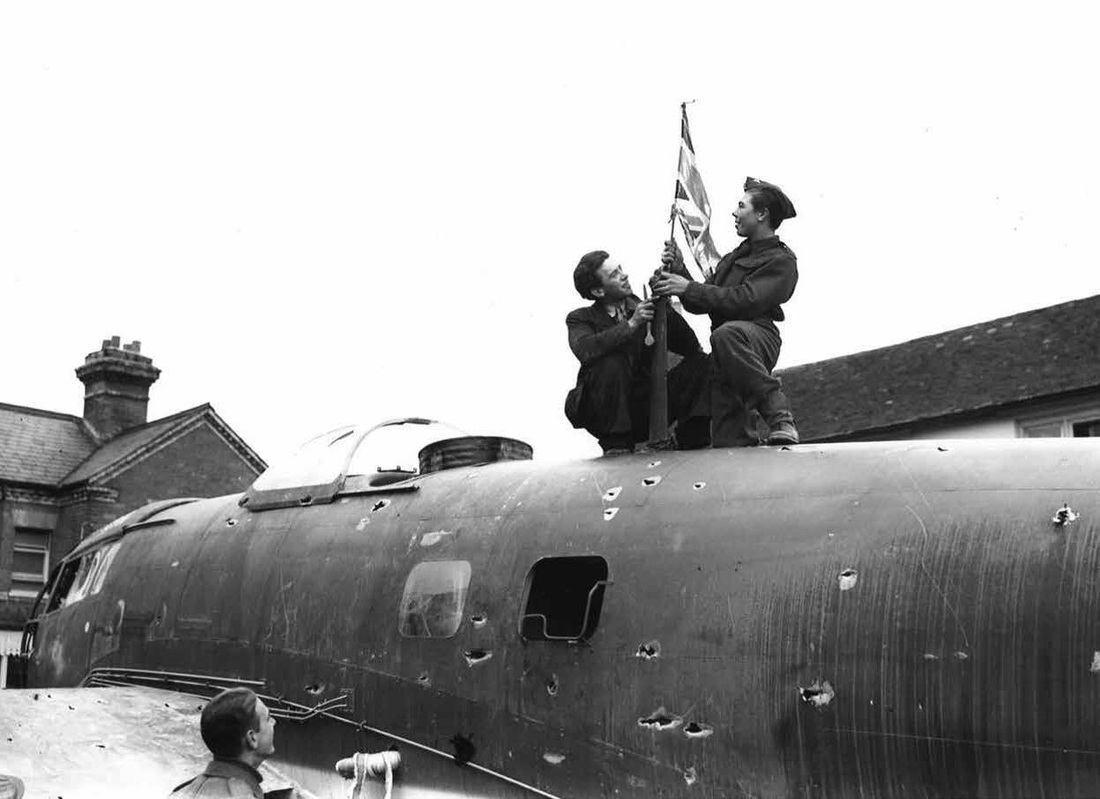 In the car park of the Half Moon public house