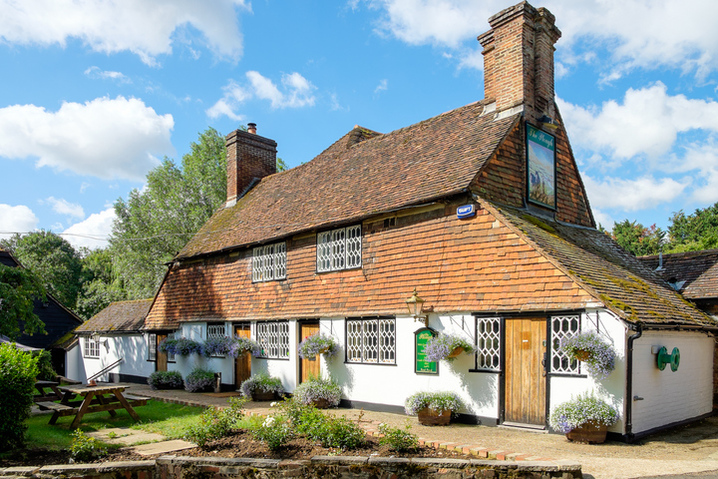 According to information on the Hildenborough A-Z website, the Plough was built in 1570.
Historic England inspected it and described it as probably late C15th/early C16th, extended in the C17th and internally altered in the C20th. At some point it appears it was a terrace of four cottages as there are four entrance doors each with a well outside, now all since filled in.​ 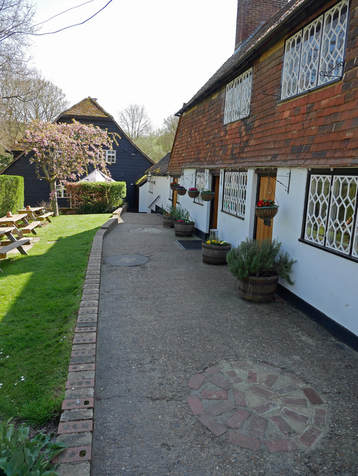 Outside each entrance door, set into the pathway, you can still see the evidence of four wells, long since filled in.


​
Next door to the inn there is a fabulous old barn. Originally Grade II listed, the Royal Commission for Historical Monuments suggests it dated to the late C18th/early C19th. During the early 1970s, the barn suffered a fire, arson was suspected but never proved. There is some debate what happened to the barn after that. Some say the fire was only in the roof, the fire brigade were promptly on the scene, managed to put it out quite quickly and the barn was repaired. Others say the barn had to be pulled down, another barn of similar size and construction was found somewhere in Surrey, (or possibly Sussex), and erected in its place.
​
UPDATE:- Information has now kindly been supplied regarding the various planning applications submitted over the years. In October 1974, an application was made to demolish the barn, permission was refused. It was noted at the time that the barn was Grade II listed. In July 1975, a new application was made, again to demolish the barn. Again, permission was refused. In March 1976, an application for the renovation and alteration of the barn was granted, with conditions. Over the next few years, the barn was improved and updated with toilet facilities, beer store, utility room and a kitchen to eventually enable it to become a function room, restaurant, wedding venue and conference centre.
We suspect the photo below was taken during the reconstruction of the barn following the fire. 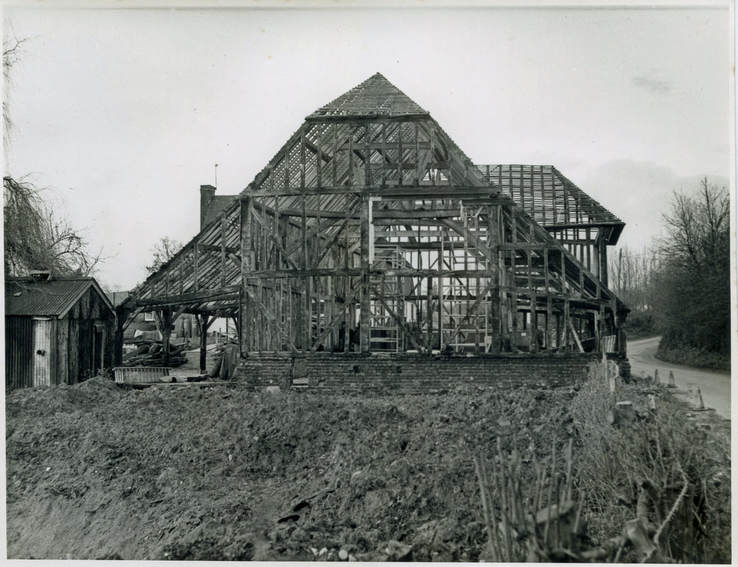 This is an advertising brochure, sadly undated, but judging by the telephone number, probably from the early 1990s........ 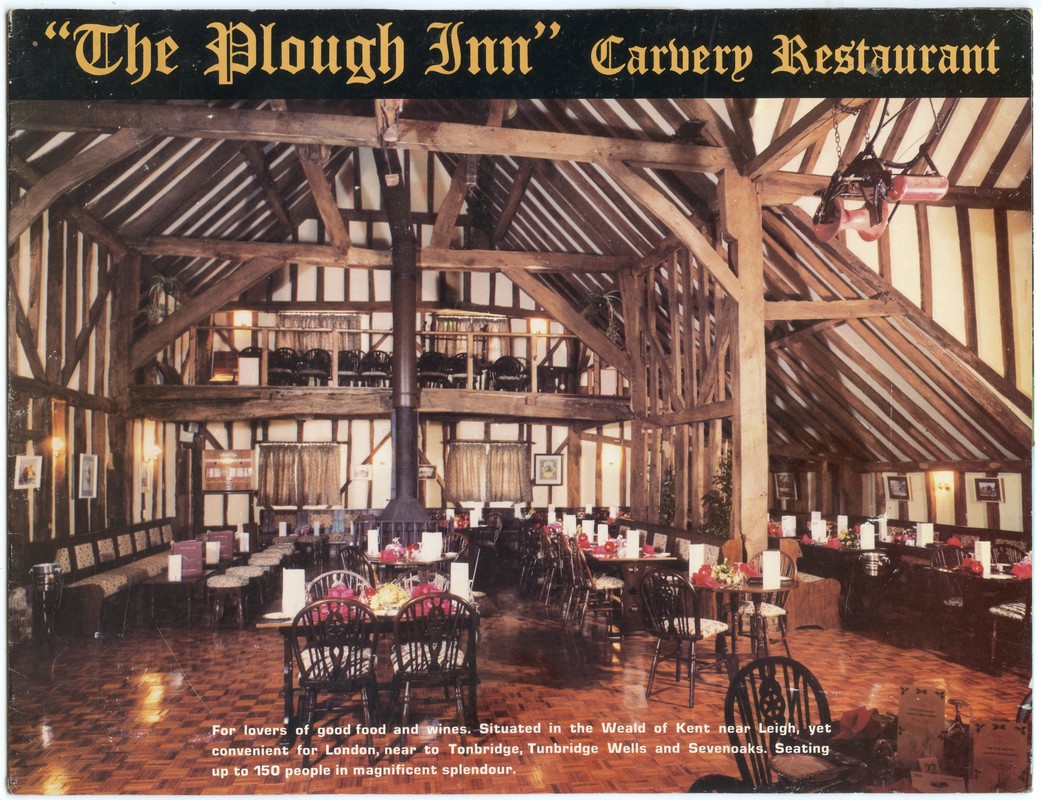 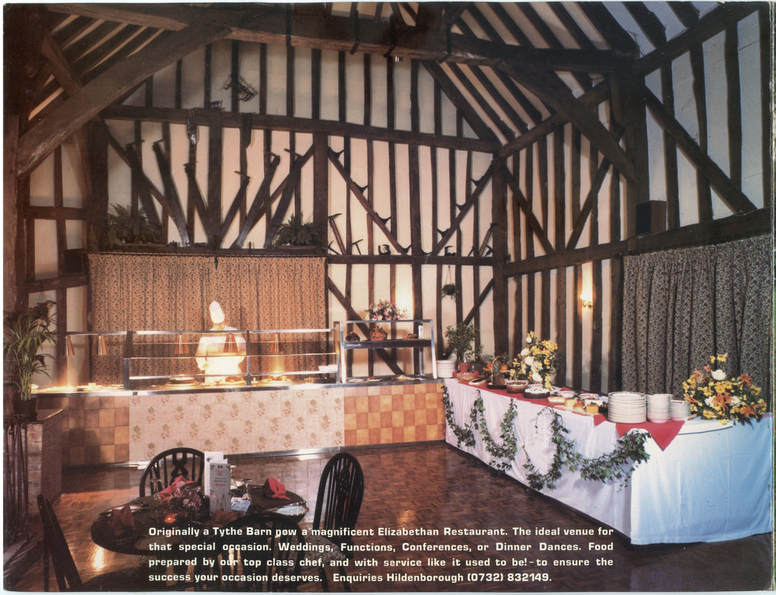 Licensees:
(the dates are approximate, the information is from various censuses and directories of the time, and lately, people's memories, so they may have been in residence for several years either side of the dates given).
​
Richard May 1881
George Jempson 1891-1927
Thomas Jempson 1927
Noel Jempson 1928-1975
​Jeremy Copestake 1975-1980
Mick & Jenny Bettell 1980-present

Memories of The Plough.....

From Oliver Boyle:-
Must have been from 1969 when my parents used to take myself and two brothers to the Plough on summer Saturday lunchtimes, walking from Leybank across the old hop fields.
As I remember it (I was 7 years old) you went in through the current door onto a compacted earth floor.
The bar as such is where the large refectory table is and the door Noel (Jempson) used to come through can be seen behind it.
There used to be a fruit machine in the corner of that wall and a large stuffed pike in a glazed box mounted on the same wall.
From memory there used to be sackcloth curtain that Noel used to come through wearing a hessian apron.
There were no beer engines as I remember and certainly if his homemade cider was bought, Noel used to bring it through in glasses from the back.
The gents was outside and you had to shoo the chickens out of there. The ladies used to be outside too!
The pedestrian entrance to the pub was through a small gate in the hedge close to where the pub sign is now. The piece of grass in front of the pub was the garden.
Before the whole place was done up in 1978 by a chap called Jeremy Copestake, there was no connection between the barn and the pub and that was the vehicle entrance to ground behind the barn which served as a car-park. The barn was a delight as it was derelict and filled with old farm machinery and more chickens!
When Noel died in 1975, the whole estate of buildings and land, which was quite extensive, was on the market for £14,000! My eldest brother wanted my father to sell up and buy the Plough as it was such a bargain but he wouldn't play ball.
​
Some memories of the pub popped up on a Tonbridge Facebook group, one thing mentioned a lot was Noel Jempson's cider, it was somewhat legendary!
Ann Philp remembers:-  "My grandfather Whalley often told a tale of when the landlord, Noel Jempson, stored his cider in a large rum barrel and the result was extra strong lethal cider, capable of felling the strongest drinker. that would have been '40s or '50s I imagine".
Alan Skinner:-   "11p a pint, many a good time, LOL xx".
Angela England:-    "We dunk Noel's cider in the early 70's, really strong.  I think I had 2 halves & was buggered.. I can remember walking home several of us in a circle.. coz if we let go....."
Alan Skinner's friend......."broke her leg mucking about, then walked home drunk not knowing. That’s how good the cider was!".