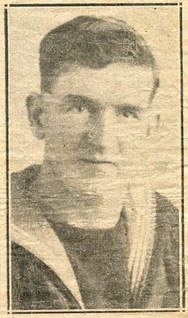 ​Ernest Herbert Spender was born 3/6/1913, educated at Hildenborough C of E school and employed by L. Jones & Son, builders, and was a member of the Hildenborough Special Constabulary before joining the Royal Navy in February 1940. He was posted to the cruiser HMS Penelope which spent most of her time patrolling the home straits. Ernest grew restless and bored and volunteered for a transfer to submarines in order to see more action, eventually joining them in June 1941. There then followed two years of training and UK based postings before joining HMS Stonehenge in May 1943, just as she was undergoing final fitting.
HM Submarine Stonehenge, P232, undergoing sea trials
Their first sea trials were patrols off Norway, then they were ordered to Gibraltar, then to Beirut, and on to Port Said just in time for Christmas, 1943. She then transited the Suez Canal, conducted some exercises off Aden, went to Colombo, and then, in January 1944, arrived at Trincomalee, a port in Ceylon (now Sri Lanka). From here, they were to patrol the Malacca Strait, between Sumatra and Malaysia. It was here, on Saturday 5th February, they engaged with a Japanese merchant vessel, the Koryo Maru No2. Their torpedoes were seen to be on target but ran underneath so they surfaced and attacked with the 3-inch deck gun and the 20mm Oerlikon cannon, successfully sinking the Koryo Maru.

Their next action was a week later, Saturday 12th February, when they engaged a Japanese auxiliary minelayer, the Choko Maru, escorted by two submarine chasers, off the coast of Penang. The first torpedoes missed and they were counter-attacked. Stonehenge dived deep and managed to survive an onslaught of over 30 depth charges. After laying low for a couple of hours, she surfaced to find the Choko Maru still laying mines. A torpedo caught the Choko Maru amidships and she sank. Another counter-attack by the submarine chasers caused some minor damage to Stonehenge so they returned to Trincomalee for repairs and a week of rest for the crew.

​H.M. Submarine Stonehenge sailed again on Friday 25 February to undertake more patrols in the area of the Malacca Straits. The submarine failed to return from that patrol, and in so doing, she gained the unenviable distinction of becoming the first Royal Navy submarine to be lost in the war against Japan. Although not certain, it is thought that the submarine was lost after she struck a mine between Northern Sumatra and the Nicobar Islands. All of the submarine’s crew of 48 were presumed to have been lost in the sinking. (Also on board were 2 guests – it’s not recorded who these two guests were or what they were doing on board).The submarine and crew were officially declared lost on Monday 20th March 1944.
​
​SPENDER, ERNEST HERBERT. Leading Stoker, P/KX 106174. Royal Navy, H.M. Submarine Stonehenge. Died Monday 20 March 1944. Aged 30. Son of Ernest Spender and Winifred M. Spender of Tonbridge, Kent. Commemorated on the Portsmouth Naval Memorial. Panel 85, Column 3.